Radio is considered a traditional and resilient communication medium, since even in the Internet age it is still preferred by people. In order to continue in existence, radio has adapted itself to the the reality brought along with the digital age, creating new forms of interaction as well as entertainment, but without losing its core traits.

In order to keep its loyal audience, radio programming must be set up according to the listeners’ preferences.

One type of radio show which attracts listeners is the radio interview; with celebrities, experts on specific topics or even well-known public figures.

But, have you ever thought about how these shows are created? A good radio interview must be planned ahead so that it lives up to the listeners’ expectations.

If you still have questions on how to set up a good interview program for your radio station, this is good moment to stop and learn.

How to create a good interview program

Radio interviews generally serve to inform, along with giving the guest an opportunity to become more well-known. The subjects discussed must be of public interest or utility, which guarantees an audience.

Check out step-by step how to create a good interview:

• Decide on the interview topic;
• Profile the guest being interviewed. Will it be a celebrity? A specialist? A leader in the community? What knowledge does that person have? What are they known for?
• Set up the structure of the program. Decide how many blocks will there be and how long will each of them last. It’s important that they aren’t so short or people might not have be able to follow, but it shouldn’t be so long to the point of making the interview tiring for the guest;
• Decide beforehand what questions will be asked. Something which is important is also giving the audience a opportunity to participates, making comments or asking questions. This is a great way of connecting people to the program;
• It’s important to have a scrip or guidelines of the whole program ready. This will ensure that the host has certain direction to follow when conducting the interview. It also avoids improvisation that may compromise the quality of the program;
• Give the guest an overview of the program. Knowing where the interview will lead will make your guest feel more at ease and receptive, contributing for a more natural and interesting show for your listeners;
• Start the program by talking about the guest. Who are they, what do they do, and why are they well-known. Go over their trajectory, degrees they may have, accomplishments. Do all this before asking the first question. By doing so you wil increase the guest’s credibility and will make the audience interested in the content to come.
• Advertise the interview beforehand. Use gaps in your programing to advertise when the interview will air, also make good use of the social midia! A good interview has enough force to increase your audience;
• Ask your guest to arrive at the studio a few minutes before the interview. Use this extra time to talk to them and make them feel at ease, especially if they are inexperienced or show signs of anxiousness due to their public display. An informal chat before the show starts could mean the difference between a regular and an spectacular interview, this will change how your guest sees your station;
• Beware of the language used during the interview. Try to understand your guest’s profile before going for a formal or more colloquial voice;
• Allow your guest enough time to answer your questions calmly. Hurrying is a successful interview’s worst enemy;
• A good interview may become journalistic content, especially if the guest is on in order to clarify a topic. Politicians, artists promoting an album, celebrities promoting their shows…all these interviews have the power to offer great content for your station that go beyond the interview itself.

Though very ancient, radio is a versatile and far-reaching form of communication which has stood the test of time and continues being one of the preferred media for listeners and advertisers alike.

Programs give radio life, thus they need to be creative and attractive in order to maintain an audience.

Interview programs have great power to connect the audience to the station due to fact they are a link between the listeners and the guest.

A good interview show is something that every radio host must be ready to prepare.

Just as important as preparing a good interview, is guaranteeing that a large number of people will listen to it.

A great way of increasing your audience is to broadcast the interview through the Internet of having it ready in Podcast format later.

With BRLOGIC you can do both easily and quickly! And better yet! You can start right now setting up your station in just a few seconds. 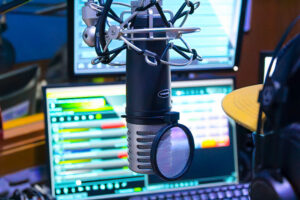 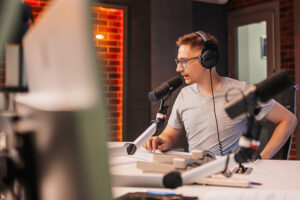